Why GetApp is free

GetApp offers free software discovery and selection resources for professionals like you. Our service is free because software vendors pay us when they generate web traffic and sales leads from GetApp users.
Because we’re committed to help you find the right solution for your business needs, we list all software vendors on our website, and give them the opportunity to feature their solutions and collect user reviews.
At GetApp, our comprehensive software listings, verified user reviews, software evaluation scorecards, product comparison pages and articles will empower you to make confident and well-informed purchase decisions.

NEW in Basecamp 4: For a limited time, get your first 3 users free, for your first year.

What makes Basecamp special?
It’s dialed in. For nearly two decades, we’ve continually refined a unique set of tools and methods to fundamentally reduce complexity, and make project management more of a joy and less of a chore. Perfected and pressure-tested by hundreds of thousands of teams on millions of projects, Basecamp’s the gold standard for a simpler, superior version of project management.

As Toby Lütke, Shopify’s CEO says, “I’ve used Basecamp for a million projects over the last decade and a half. It’s beautiful software that has resisted every wrong trend and stayed true to the things that mattered most. Highly recommended.”

Basecamp works because it’s the easiest place for everyone in every role to put the stuff, work on the stuff, discuss the stuff, decide on the stuff, and deliver the stuff that makes up every project. Not on separate platforms scattered in various places, but all intuitively organized in one centralized place where everyone can work together.

Basecamp’s intentionally simple by design. It’s why teams that sometimes leave in search of “more power” end up slamming into the consequences of over-powered software: Complexity. Complexity doesn’t work. Basecamp does. It’s why those that leave end up coming back and sticking with us the second time around. You never know what you had until it’s gone.

So simplify. Get it together. Ditch the frustrating and ineffective “stuff scattered everywhere” multi-app approach, and switch to Basecamp’s all-in-one, unified, and organized project management method instead. Level up. 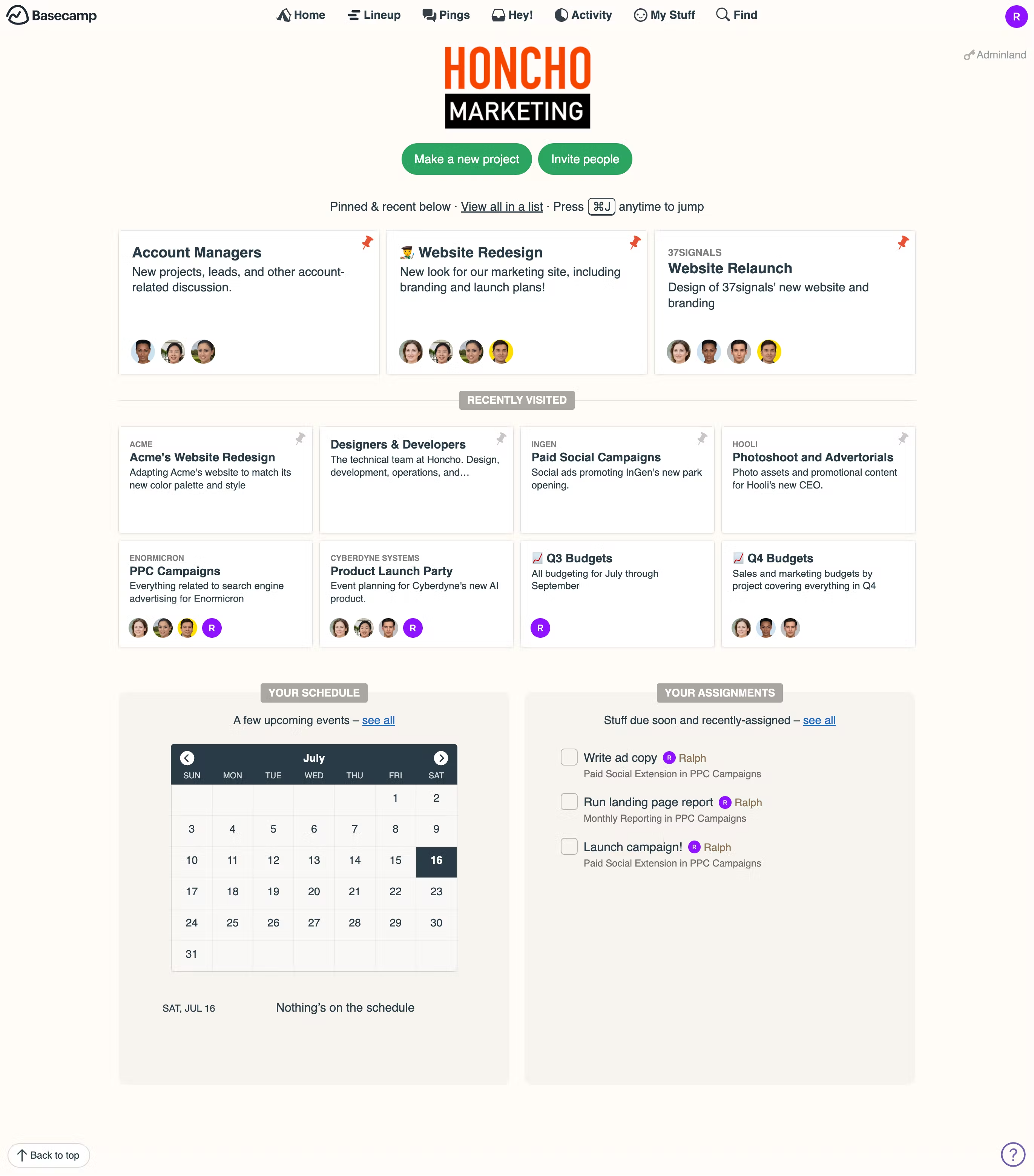 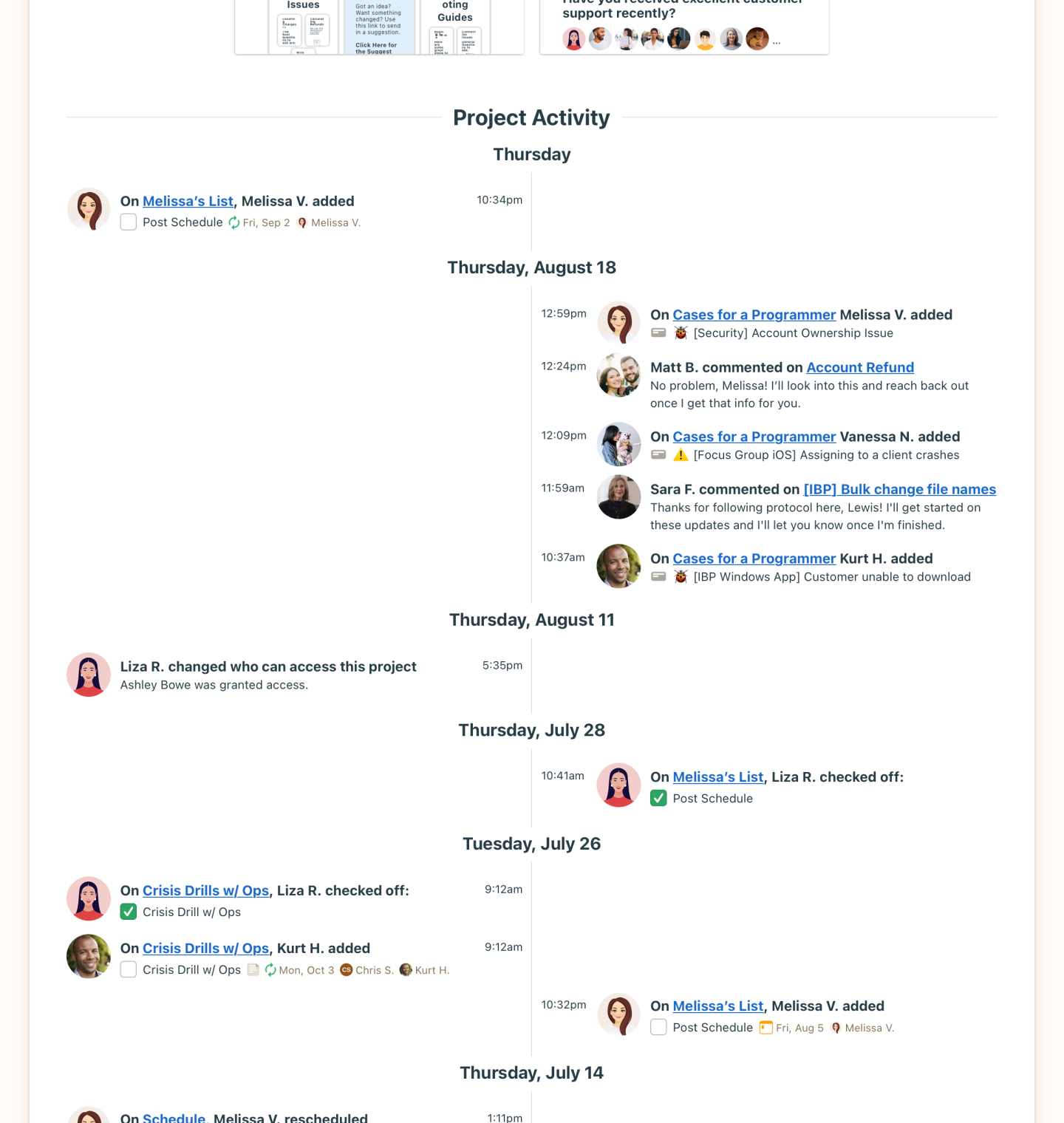 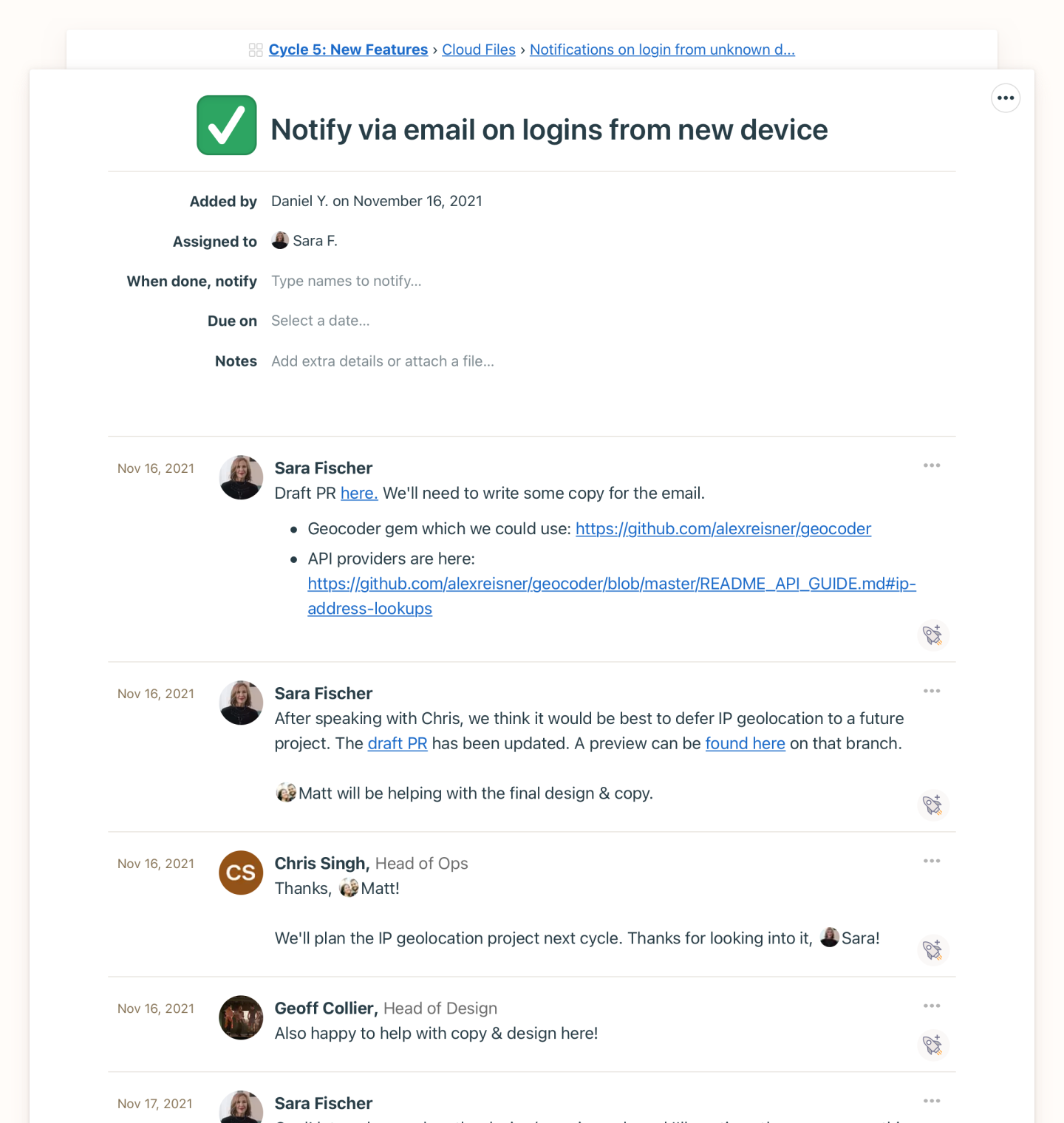 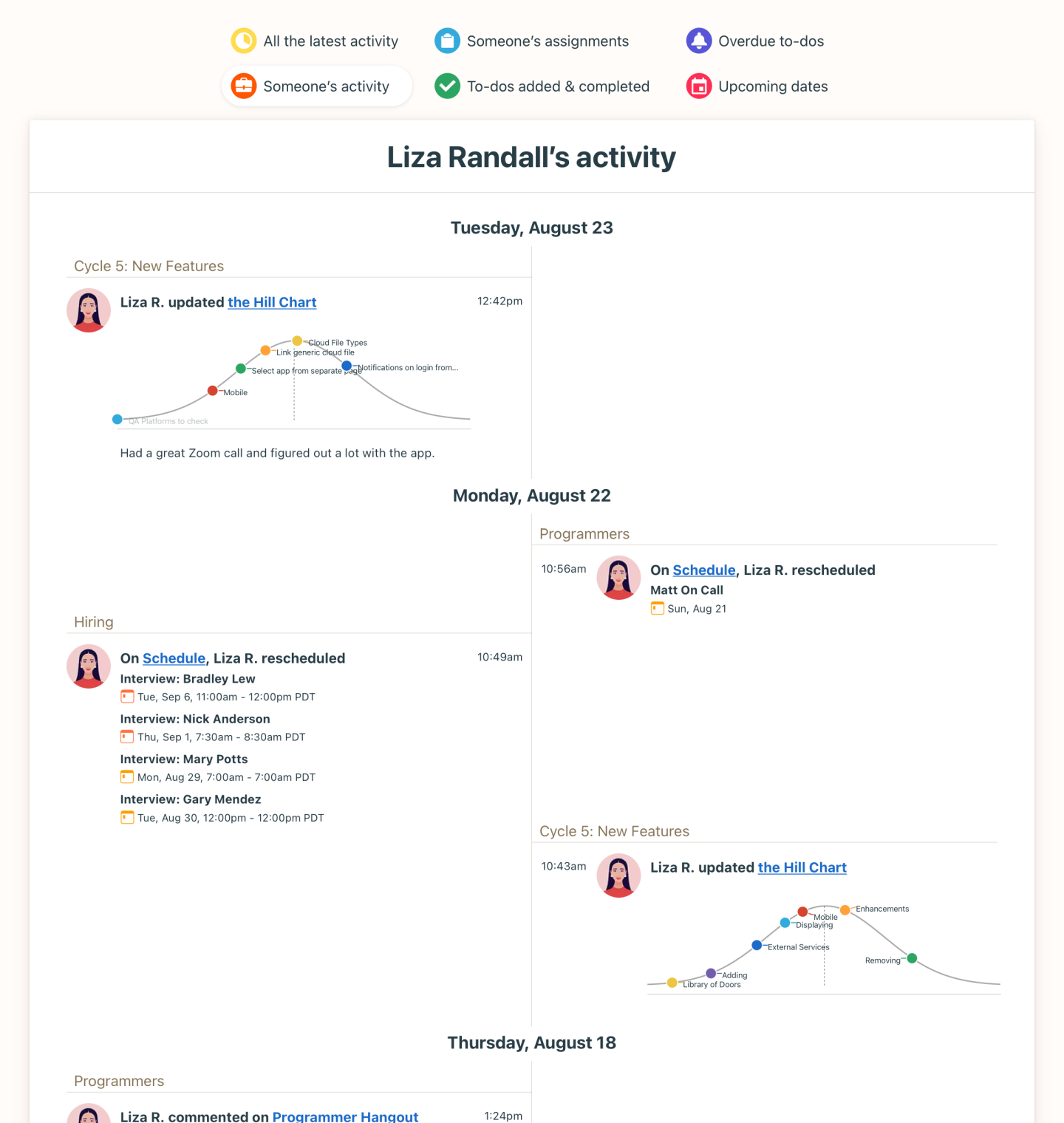 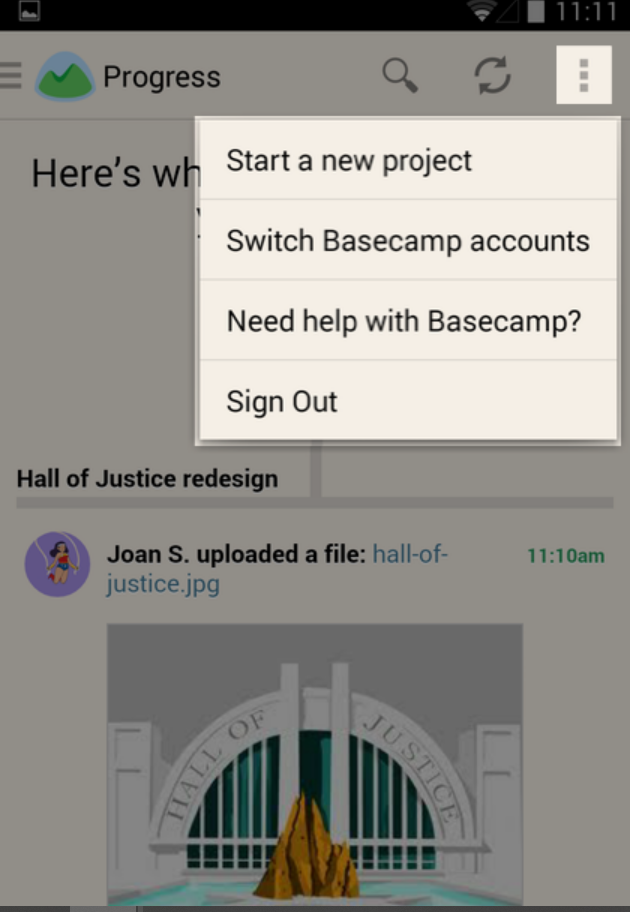 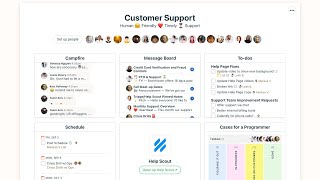 Been using this for several years, I do like how simple it is to organize and accomplish tasks...

Been using this for several years, I do like how simple it is to organize and accomplish tasks across the board. I would say, if you're looking for a project management solution for recurring tasks and projects, this is a great fit.

I really love how it organizes conversations around tasks. Each task has a permanent record of the discussion going on for it, which keeps the discussion focused and organized.

There are three versions of basecamp, and they don't talk to each other. I have suppliers using all three versions, and I have to log in separately for each.When you have multiple projects, the project updates can be hard to follow--it's not immediately clear which project has which update, I have to read the whole sentence to find what I need. Would like something easier, maybe color coding?

Trello is great, but it's too open. Needed something more structured.

Structure, organization, popular among others in the industry.

Great tool, but unfortunately the price is one of the highest values

Basecamp is an incredibly strong task management tool. Great for small teams. As far as resource management and any medium sized projects basecamp lacks behind its competitors. With all this said, I love basecamp as it is nostalgic for decades now of work that I've been able to implement easy with teams and organizations.

resource management, alignment, lack of scheduling, confusing interface that forces users to just use search, upgrades and updates... although good, only make it harder to leave and not actually fix needed overhauls.

So Asana, was better designed back in 2018 or so, but was also very buggy at the time, and still lacked in scheduling and other areas, we made the switch and have been happy, but now basecamp is needing another overhaul to keep up with alternatives.Sad to say but their pricing model (back then) was unmatched and now they are switching that up to be per user/month like everyone else. I'd suggest they stick in their lane, but alas.

sad to say but it was pricing. Now as we've grown we need more value that basecamp cannot keep up with.
Sheikh
Overall rating

I am satisfied but it has a scope for improvement.

I am satisfied but it has a scope for improvement.

Sometimes the messages get delayed and sometimes we have to refresh the paage as it is unresponsive sometimes.

There was no project management.

The Best task allocation and monitoring tool available in the market

In remote workplaces, it becomes very difficult to monitor and track the progress of your peers or...

In remote workplaces, it becomes very difficult to monitor and track the progress of your peers or teammates. Basecamp has been a saviour as it helps us not only monitor and allocate tasks but also becomes a source of communication for internal teams to get the work done. We recommend Basecamp to any IT company which has multiple projects and resources to handle.

Basecamp has been a great tool for our team as all the projects and tasks are allocated by the managers and peers on this platform and then it becomes easy for everyone to keep a track of it. Basecamp provides an easy communication via threads that make it very convenient to use. We at Wise IT inc have been using basecamp as a project management and collaboration tool and love how it makes our lives easier. It also has a mobile app which makes it more easier to keep a check on your phone when you are away from work.

Basecamp does not have video conferencing option yet which has become a very important feature for companies that are working from home. Apart form this, I have never faced any problem using Basecamp.

The interface of Basecamp is easier than Asana. Also in terms of features, Basecamp currently leads the market.

Pricing and features are better for Basecamp compared to other alternatives available.
Verified Reviewer
Overall rating

Good friendly interface. You can learn how to use it very quickly, so you can organize your...

Good friendly interface. You can learn how to use it very quickly, so you can organize your business and improve the productivity with good tracking tools.

Basecamp is easy to implement, easy to use in a team.

It is quite expensive for small business, 11$ per user with no other options.

It was only the question of taste for the interface and usability.

It was not much more expensive as I used it for a small business
Showing 5 reviews of 13,964 Read all reviews

Q. What type of pricing plans does Basecamp offer?

Basecamp is available at $11 per month/per user

Q. Who are the typical users of Basecamp?

Basecamp has the following typical customers:

Q. What languages does Basecamp support?

Q. What other apps does Basecamp integrate with?

Basecamp integrates with the following applications:

Q. What level of support does Basecamp offer?